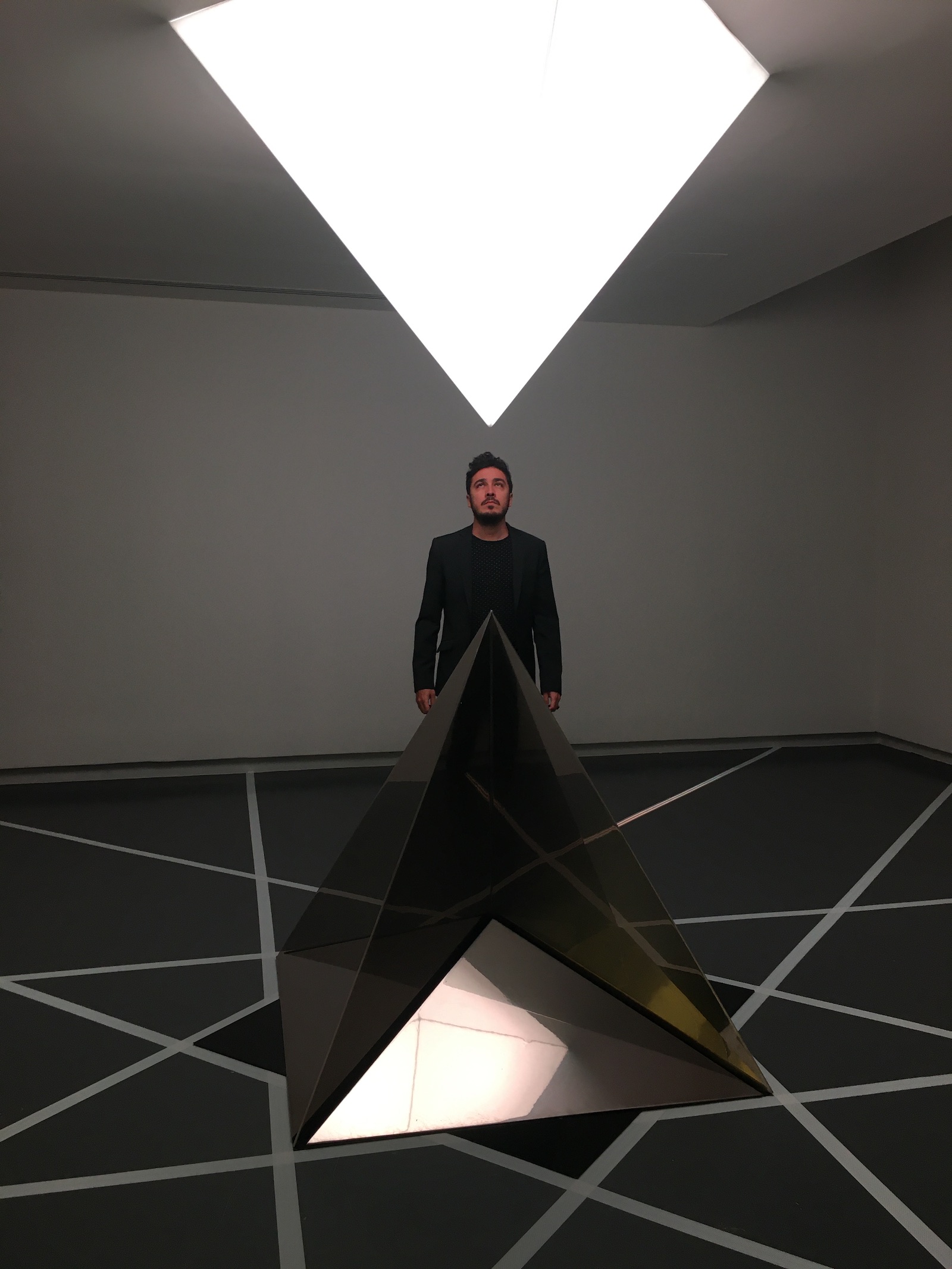 The Earth, a layer of soil that sustains us and binds us as if we were inseparable. It is what gives us life and supports us in our journey, and it is also the basis of Mareo Rodríguez’s work. In his pieces, he thoroughly explores the topography and the natural territory, spaces that are conceived as a mantle of energy that is alive and constantly moving. In Mareo’s own words, it is a “superficial stratification sculpted through time, with a terrestrial language that emerges, beats and creates different tensions revealed in the landscape.” Painting, that old technique that had led men to create since the dawn of time, is also one of the tools Mareo Rodríguez uses to create.

His work brings forwards monochromatic pieces with a roughness so effortless that they resemble landscape photographs. The interplay between light and shadows breathes life to their two-dimensional nature and strengthens the message about the Earth’s surface. Black, gray, gold and white hues fill the space of the canvas in each of his pieces. Perhaps this interplay of the two dimensions is what led the artist to explore with sculpture, recreating the reliefs and depressions in the Earth’s surface with volume. With the same color spectrum as his paintings, Mareo is capable of capturing the shapes in nature, grasping only the projections of height, the geometric shapes and complexity of the surface to create clean, elegant and self-sufficient pieces. As if this were but a small feat, the tribute he pays to the Earth is so lively that his sculptures later became installations. His identity, as if the pieces had his signature visually tattooed, is repeated through his color palette.

Large scale installations complete Mareo’s body of work. Halls are completely filled with elongated sculptures that represent valleys, hills and the real spaces his work undeniable alludes to. Complex sculptures remind us of the environment, of the rocks and spaces were elevations and depressions meet. The vastness of his work is such that it is nod to romanticism in the sense it alludes to the grandeur of nature in comparison to the individual. How could we not remember Caspar Friedrich’s work and the vast sea in front of a single man? How could we not, when we are faced with a large structure as a metaphor to mountains, rocks and all the nature that surrounds us? “I aim to encompass different scales in my artistic proposal, from the massiveness of mountains and rocks, their decantation and fragmentation process until arriving at a single rock as a basic unit,” Mareo explains. He also addresses the condensation of light into matter, as well as its fragmentation process as fundamental elements in his work, especially due to the transformation and expansion of energy in time.

The fascination about creation, and art as a language of communication has always been with me since my early years of life,  my mother discover the talent since I was a child and roll me in classes of different techniques as watercolor, oil and sculpture.

I think my first approach with installations comes from my years as an architect and interior designer; I quit my 12 years career of architecture to become what I´ve always been.

Since I´ve studied Architecture, the minimalism has always been present, I learned in the university to synthetize, to reduce to the minimum aspect of the design, do the more with the less. Is a concept that I ´ve carried all this years in my practice; however I don´t seek to fit in a particular movement of art, or in a trendy style;  I rather the timeless and universal language as a testimony of the particular time we live.

·       In your work, matter is stretched, compressed, creased, suspended…. In one word, tested. What’s the point of that reflexion ?

All my artwork is a tribute to nature, expressed in the abstraction and synthesis of the landscape; there is also a spiritual search, constant aspects like “Matter” related to this material and physical plane and “Light” related to the ethereal and search for the sacred.

Concepts as expansion, frequencies, gravity, the movements of the mantles and waves, all this is part of my understanding of the mineral kingdom and the connection with the cosmos.

·       This reflexion is even more obvious in your installations. Is it then a way to confront material with space ?

My approach to art has a lot of influence of how I faced an architectural project, I think every project is different and singular, so I try to think about the space where is going to be inserted and how is going to be related with it, so the piece of art can dialogue and communicate. The material is also part of the same process of thinking in the context, the history of the place where is going to be located, and also the resources designated to the project, and every material is a whole universe, so is a combination of many factors that determines the design of the installations.

·       About the spectator, how should he feel in front of your installations ? What is his role ?

The view and perception of the viewer completes the artwork in the sense that they give a proportion, scale, interacting with piece, and feeling it; the more interpretations and feeling they come up with the installations the better; for me Art doesn´t need to be explained, but it does has to transmit and communicate.

·       How do you comprehend the space of the museum and the gallery ? Does it rather enclose or emphasize your work ?

I try to study well the space before making a project, aspects in the museum or galleries like lighting, materials, proportions are decisive to make a good proposal, so the artwork can breathe and dialogue properly.

·       Many artists use color as a powerful way of expression. You don’t. Is the light of your artworks used for replacing this lack of color ?

I use color in a very reduced palette, when I use it is because I need to transmit something with it, not just as a decorative aspect, I rather use it as an element to reinforce a concept. Certainly black and white are my favorite colors, you can´t reduce them anymore, they contain the essential.

·       La Perle deals with french cultural actuality. What is your vision of french art as a spanish artist ?

I am Colombian, based in Barcelona. France has always been one of the places to look for art in many periods of humanity, one of my favorite artist is French, Pierre Soulages, who has one of my favorite quotes: “ Black is a luminous color”.

·       To you, how does contemporary art look like in people’s mind and public opinion ?

I think more and more the people in general have a better approach to conemporary art, specially with the installations where they can interact; also, the big use of the smarthphone and social media makes the art more democratic and accessible to the public, at least through a screen.

His work is filled with the grittiness of natural territory: mountains, rocks, waveforms and lava. Nature is his biggest inspiration. He says: ’Matter is light condensed.’ Referring to matter as a process of transformation and expansion of energy over time.

His work is constantly moving like a tectonic plate and depicts beautiful earthforces.

·       Where does your interest for topography come from ?

My firts approach to topography comes from the city I grew up, Medellin, which is a Valley surrounded by mountains, afterwards working as an architect I had to deal with topographic plans.

·       Your approach conveys a telluric vocabulary, is there a symbolic aspect

behind ? What is your gaze towards this ?

My works is related to nature, and I seek to cover different aspects, from the stone as the basic unit in fractal scale of the universe, untul mountains, rocks, and telluric forces is the language of that mineral reign.

·       In which way, natural territory occurs as a living entity through your

In  Nature everything is related, so I try to express our connection with our mother earth that is not an entity appart from us, is part of us, is also a call to respect and value it more.

·       Your artistic approach is kind of divided into two axes or two mediums,

paintings and sculputres. What each of them allows you to embody/ state ?

Yes, each technique is a new language and way of expression to talk about the same speech, let’s say my artwork is a laboratory where I am constantly playing and researching with new materials and methods,  that allows me to express in different ways and touch different points of sensitivity in the viewer.

·       Also there is an ambivalence as paintings appear to depict  fluid landscapes while sculptures seem more constant/solid in a way. Is that really revelant in your approach or is it something different ?

Let’s say painting is a more organic and emotional proccess , sculpture are more rational and geometric, somehow the architect side speaks in the 3D approach, although I m currently working on a new serie of sculptures very organic and fluid.

·       However, both axes seem to find a common way through their contrast between light and darkness. Could you describe your process/ vision about it ?

I went through the path of art as a neccesity to heal and to find a spiritual way to connect with myself and the universe; we all have Light and darkness inside, and there is the eternal struggle between them; one exists because the other; I am tryng to find the balance.

Also darknes or matter refers to this material living plane, ligth is related to the eter and spiritual state.

·       What about the combination of materials within your scuptures ?

Depending on the concept or idea I need to express I look for the elements to materialize it.

·       We notice a strong interest for materiality in your approach as your work deals with the invasive and huge aspect of elements but also with it’s reduced aspect. Could you tell us more about this consideration ?

I am very curious about the elements in nature and how different and complementary they are.

·       What would be your dream place to exhibit your work (institution,

natural environment, it can be anything) ?

Natural environmet is always a great place to comunicate, is where my art speaks with more freedom I think.

Obviously the intimacy of a museum or institution is something that atracts me aswell.

But in any case in silence is where my art

Can breathe and speaks clearly.

The work of Mareo Rodríguez is silent and with an intense vibration that accompanies his work, in which the balance of his antagonisms beats waves of images, colors and lines, transforming his scenery into palpitations.

His work Expansión, is the evolution of that space that Mareo has expanded in his worlds, with series where landscapes are stages, in which the being finds itself in its most empty, ephemeral moment, but at the same time, more real and human.

Same sculpture but new color What does gold mean

A new “Cashmere” by the Bulgarian artist @dani

A masterpiece just finished 🖤 by the talented B

A real ode to universe 🪐 @mareorodriguez ’s a

Do you see these waves ? 〰️ They transport lig