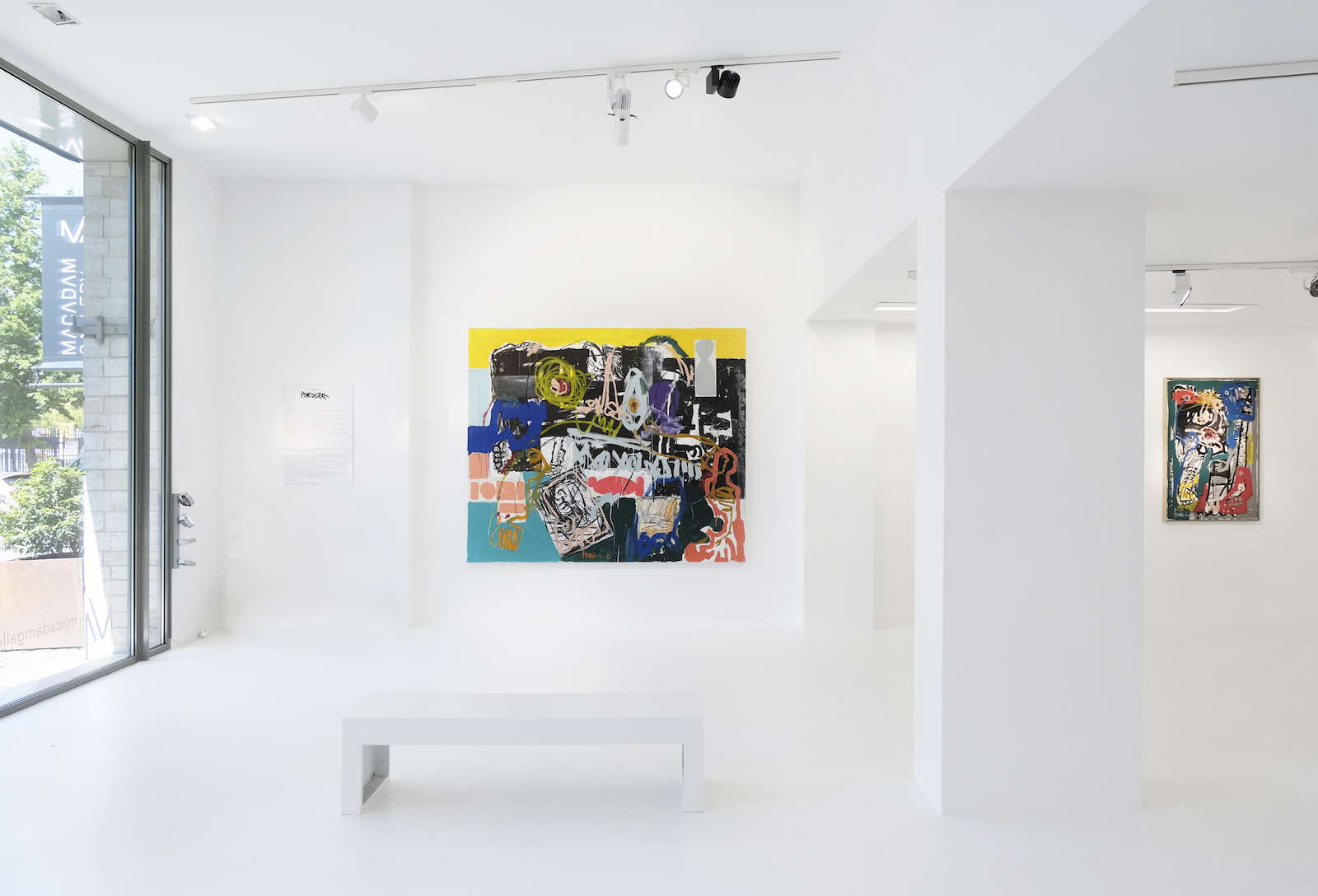 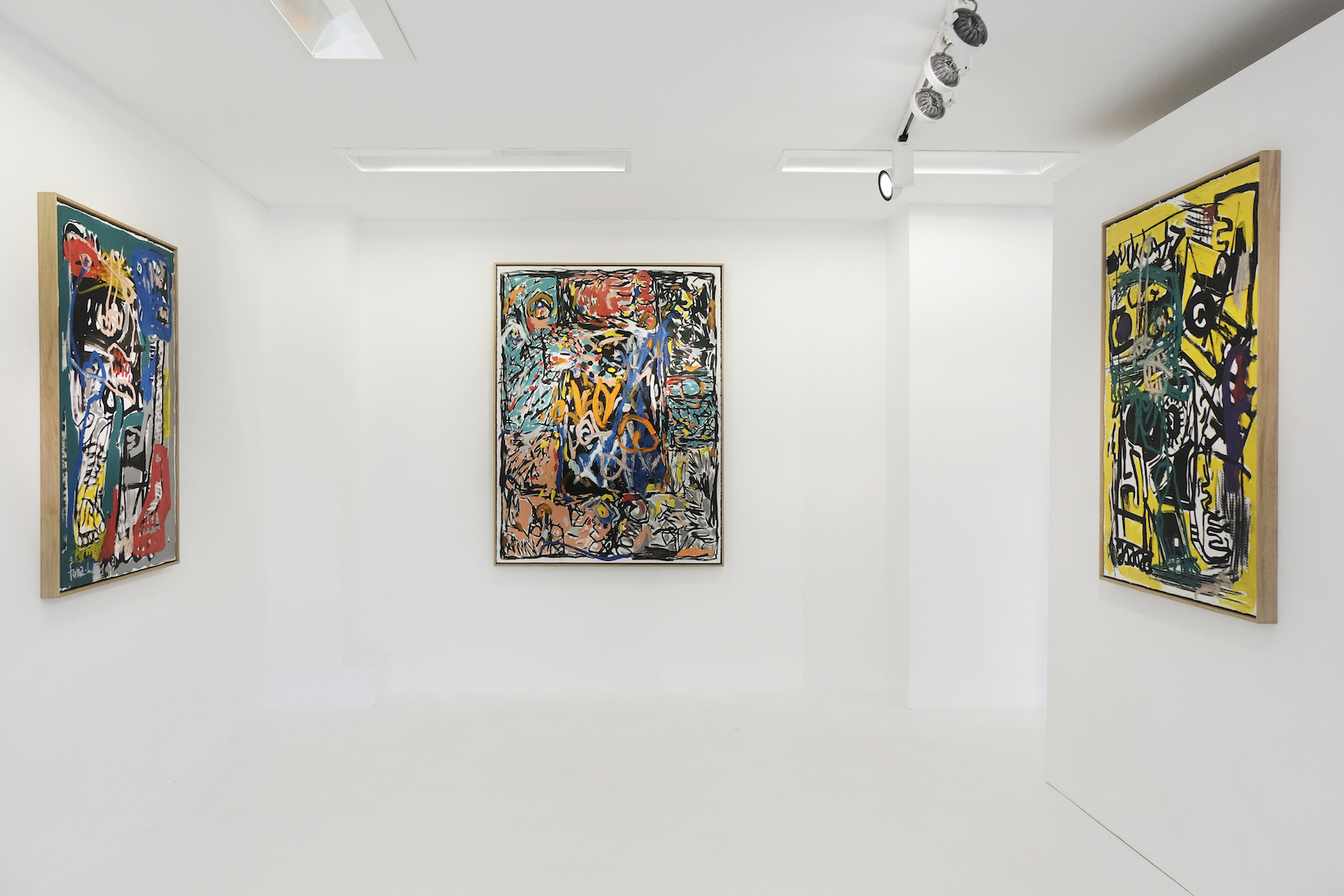 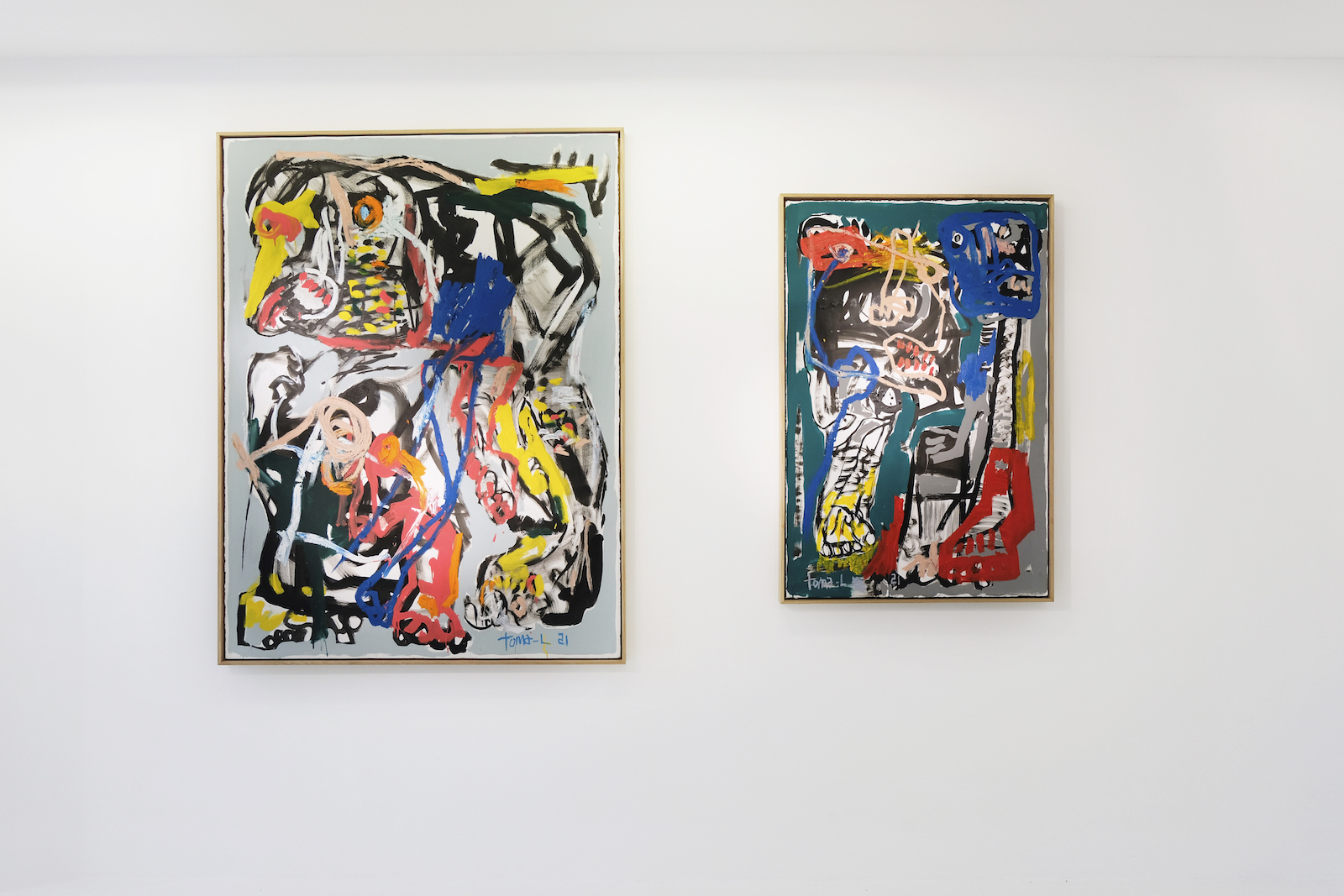 MACADAM GALLERY is pleased to present “Pont des RAL”, the second solo exhibition in Belgium of the French artist Toma-L.

“In the beginning, I don’t really know what I’m doing, but I want to know what prefigures my
paintings…

For this exhibition, I see myself as a constructor. I begin by posing the foundations. Using the main gable wall of my atelier as a canvas to create a roadmap of black materials: willow charcoal, compressed charcoal, ink… I placed this blackness at the centre, the colours surrounding it. The roadmap, the colour-belt, the background become a kind of pictoral pathway. I stapled sheets of paper onto the wall like windows. I had already chosen the colour palette. Colours which trespass upon the “paper openings”. Colours which often outline the blackness.

This first series of creations “signify the idea of the edges of the painting”; like Pierre Alechinsky’s major work “Central Park” in which the black outline serves to highlight what is being depicted and is simultaneously an integral part of the whole.

From here sprang a succession of gestures, figurative in nature, always black surrounded by a spontaneous application of colour. I repeated this ‘tableau’ of black surrounded by colour fourteen times, fourteen colours from the chromatic scale chosen for this exhibition to generate the piece and its backdrop. Like turning the pages of a book one by one, lingering each time, the words run into one another, but each letter has its own distinguishing form.

The second series is characterised by a change in scale. I moved onto a much larger window, a bigger format which altered both the composition and the words. On certain sheets the drawing, always done in black, is less figurative. It designates the delimitation of the format, and the colours applied around it now seep in bit by bit, sometimes in strokes sometimes dots..

The third and final phase of preparation is distinguished by a series of canvases which I glue down and smooth out. I then remove the sheets of paper which made up the background in order to restore them onto the canvases which causes the wall to recede into the windows I have created.” Toma-L

This website uses cookies to improve your experience while you navigate through the website. Out of these cookies, the cookies that are categorized as necessary are stored on your browser as they are essential for the working of basic functionalities of the website. We also use third-party cookies that help us analyze and understand how you use this website. These cookies will be stored in your browser only with your consent. You also have the option to opt-out of these cookies. But opting out of some of these cookies may have an effect on your browsing experience.
Necessary Always Enabled
Necessary cookies are absolutely essential for the website to function properly. This category only includes cookies that ensures basic functionalities and security features of the website. These cookies do not store any personal information.
Non-necessary
Any cookies that may not be particularly necessary for the website to function and is used specifically to collect user personal data via analytics, ads, other embedded contents are termed as non-necessary cookies. It is mandatory to procure user consent prior to running these cookies on your website.
SAVE & ACCEPT